I guess that depends on your goals.

Me, I’ve gotten tired of constantly fighting to keep things synced if I do remote development and then transfer files to the 'bot.

What I want to accomplish is a smooth and seamless development experience using the remote execution capability of VS Code. For that, the Pi-3 that I have just doesn’t cut it.

Later on when the emphasis is on longevity, I may switch back.

You have Carl developed past the initial configuration stages and are working on continuing refinements.

I haven’t reached that stage yet.

Additionally, experience with the Pi-4 on these 'bots will be valuable - for example, the inability to re-flash firmware on the GoPiGo-3 using a Pi-4.

More and more people will be coming on-line with Pi-4’s, so this body of experience is essential.

It’s really not important what version of the Pi you use. What’s important is that it meets your needs and you’re having fun.

I guess that depends on your goals.

I’m with @jimrh on this one.

It only perpetuates the false belief that mating a Pi4 on a GoPiGo is reasonable.

. A lot of what we do isn’t very reasonable, except for the reason that we enjoy it (heck, I just saw a small video of a golfer on Twitter. People earn millions hitting a small white ball with a stick until it goes into a hole - talk about ridiculous

So to each their own.

That goes for starting protest groups too

DI/MR bots are battery powered and the Pi4 cuts the run time in half at best and to a third or quarter if you actually try to use the cpu.

And just to not bash only the Pi4 for mobile robots, the Pi3B+ draws an extra 170ma over the Pi3B

If runtime and reducing power consumption are your primary criteria, then why aren’t you using a Zero-W?

If there’s one thing that I despise down to the roots of my soul, it’s religious wars.

I had enough of that with the Atari vs Commodore, Atari 8-bit vs Atari 16-bit, PC vs Mac, Intel vs AMD, Windows vs Linux, distribution vs distribution and now, which Raspberry Pi is the best one for a 'bot?

NO, a thousand times no!

This is the kind of senseless infighting that has driven me away from groups and platforms in the past.

I may disagree with the choices you, Keith, (or anyone else for that matter), decide to do with your bots; but the real bottom line is that it’s YOUR bot. My opinion doesn’t count. What counts is what YOU might want to do with it.

If someone comes onto this group wanting to mount a Jetson Nano or Xavier1 on a GoPiGo chassis, more power to him! I’m not going to chase him away just because he’s not using a Pi-3.

And aren’t you the one who wrote that the PRIMARY goal for all this was to have fun?

So, where did the fun go, and why do you even care which Pi someone puts on their 'bot?

(1) There’s now a Jetson Xavier board that’s pin-compatible with the Jetson Nano and runs on the Nano’s dev board.

Jetson Xavier NX delivers up to 21 TOPS for running modern AI workloads, consumes as little as 10 watts of power, and has a compact form factor smaller than a credit card. It can run modern neural networks in parallel and process data from multiple...

Unless it’s winter. Then they use small orange balls so they stand out against the snow!

Re: The Jetson Xavier:

Our dear friend @thomascoyle11859 seems to have found the love of his life regarding robotics if his Amazon review is any indication. 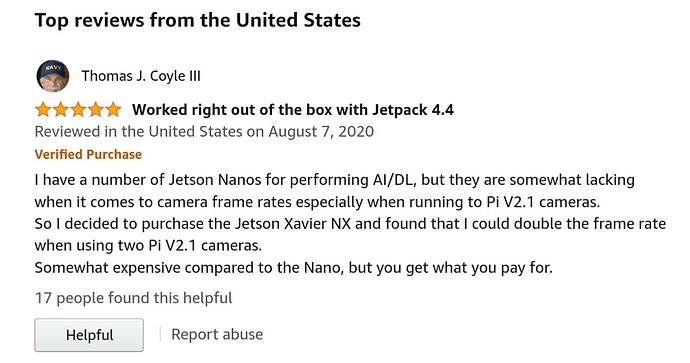 He seems to be in Hog Heaven with this board. I’m tempted to try one too, but maybe not on a GoPiGo - I’d need a car’s battery to run it. Or maybe the battery from a Harley? I’d need the rest of the Harley to carry the beast too!

I have four Rpi 4Bs, a Xavier NX and numerous Nanos.

Yes, the Xavier NX is somewhat power hungry, though it can be powered all the way from 9 to 20 volts dc so a pair of big 3S Lipos will work fine.

As I have stated in the past, the GoPiGo3 is fun for software experimenting, but way too small to be of practical use.

I have completed the assembly and testing of a ServoCity Prowler that runs Donkey Car software (v4.1.0) on a Nano with a Sainsmart 160 deg camera that has been trained to patrol the perimeter of my property.

I also have a very large version of the GoPiGo3 that runs a special version of Donkey Car software on a Rpi 4B 4GB that uses an Intel T265 tracking camera to navigate a pre-driven course. I call it YODO (You Only Drive Once) because you only drive the course once and then it will autonomously drive the course by itself.

One of the hot configurations right now is either a Nano or an Xavier NX and an Intel D435i depth sensing camera complete with an IMU running Donkey Car. An experimenter in Australia has this setup working on 1/8 scale R/C chassis and it is amazing to see it run a path once it has been trained.

Any chance of getting pictures of some of these beasts? 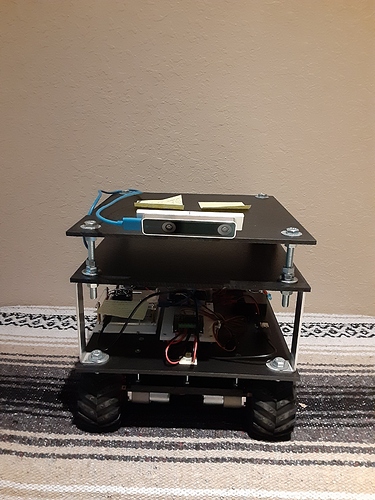 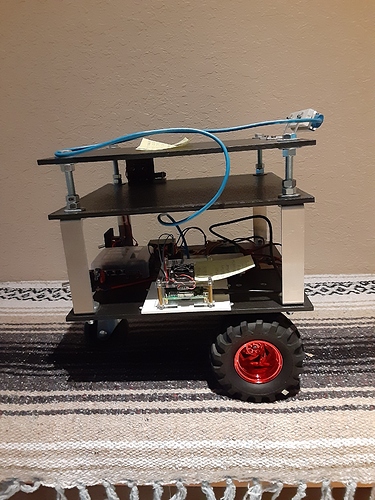 This is the big version of GoPiGo3. It runs a Rpi 4B 4GB and an Intel T265 tracking stereoscopic camera. This is the one I referred to as YODO. 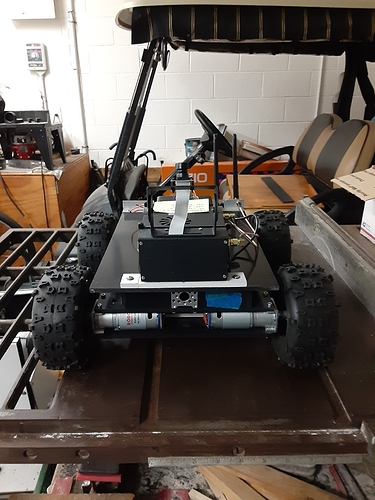 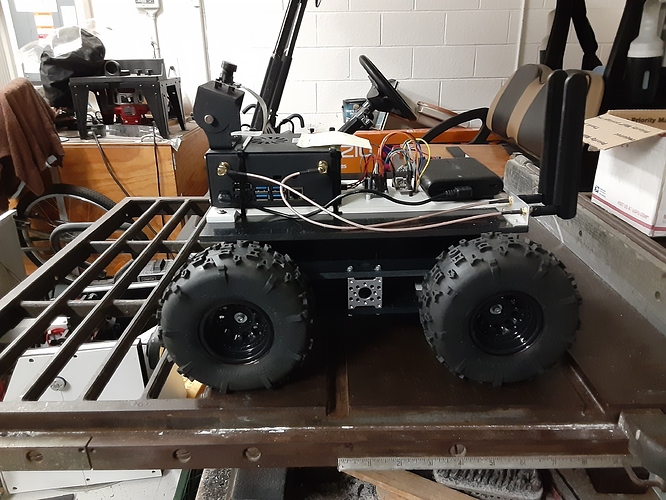 This is the ServoCity Prowler while under construction. It is running a Nano 4GB (in the black box) and a Sainsmart 160 deg FOV camera and Donkey Car v4.1.0 software. 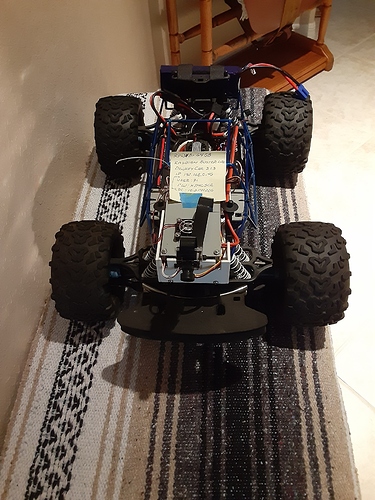 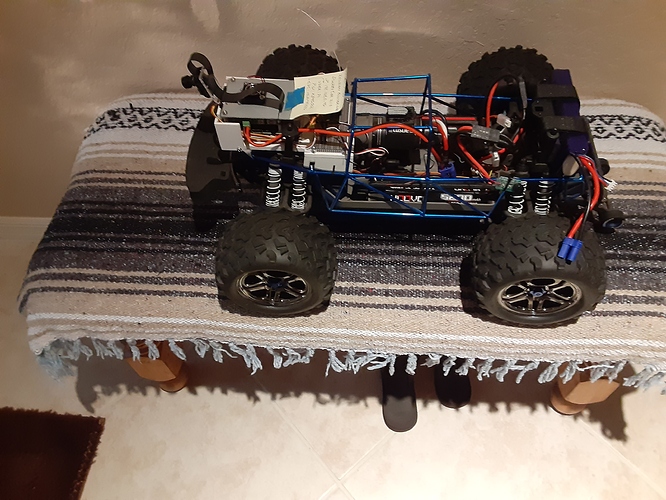 This is a Traxxas 4WD E-Maxx running a Rpi 3B+ and a Robotic Masters Robo HAT MM1 M4 that allows me to drive the E-Maxx with an R/C transmitter for data collection. This one is running Donkey Car v3.1.5.

Wow. Both robots look great. I had heard of the Donkey Car software, but haven’t really looked at it.
/K

You do realize that you are costing me something in bandages - for the scrapes on my chin! (. . . hitting the floor. . .)

Can you provide details, (and pix), of how you power them?

Thanks for the kudos, much appreciated.

The Big GoPiGo3 is powered with two 5000 mahr 3S Lipos in parallel that provide power for both the 12 vdc motors/controller and the Rpi 4B through a 5 vdc buck switching regulator.

The ServoCity Prowler has two 3000 mahr NiMH batteries in parallel that provide power for the four 12 vdc motors/controllers and an Anker 13,000 mahr 5 vdc battery pack that powers the NVIDIA Nano.

The Traxxas 4WD E-Maxx has two 5000 mahr 2S Lipo batteries in series that provide power to the motor ESC and steering servos and a 3S 5000 mah Lipo battery powers the Robo HAT MM1 M4 that provide 5 vdc to the attached Rpi 3B+.

I would love to actually see how you set up power, if that’s at all possible without disassembeling the 'bot.

Do you have reference numbers or part numbers for the batteries you use? It would be interesting to look them up.

When Alan decides to come back, I don’t want him to think we’re deliberately tweeking his beak and - let’s be honest - we’ve kind-of hijacked his thread.

So I decided to create a NEW thread that we can migrate this discussion to:

Let's talk about the Pi-4, Killer Nano-bots, or whatever unreasonable idea strikes your fancy! GoPiGo

I’m starting a “Sure! Sounds Great! Let’s talk about that!” thread that welcomes and encourages conversation about odd-ball configurations that are patently unreasonable. IMHO - “Hobby” robotics is, by definition, “unreasonable” in the same way that taking an Atari XE (16 k of RAM), and hardware-hacking it to run a full 64k, sans schematics, technical specifications, etc. is “unreasonable”. Why not just go spend the few extra bucks and get The Real Deal, without having to solder chips, filte…

What say we wander these discussions of monster 'bots over to the new thread, 'eh?

Check my new posts there.

This is the big version of GoPiGo3

pretty cool, but is it really a GoPiGo3 ? I’m not seeing the red board on it.