Charlie has an Identity Crisis! Vellman 3" display befuddles my GoPiGo

Damndest thing I ever saw since I dumped the entire authentication username and password file on an IBM 360 at my college back in '76 using openly published system control card commands. . . Grade files, Registrar and Treasury files, every username and password on the system, EVERYTHING ! Of course, that’s a whole 'nother story.

The other day I decided to - finally - hook up the Vellman 3.5" touch-screen display to Charlie and try to set it up as a secondary display.

Poor Charlie. . . . Didn’t know what hit him. Next thing I know he’s absolutely INSISTING that he’s a Grove Pi, and there was NOTHING I could do about it. Run a Dexter Update? Nope. Change the “Detected robot” file to contain “GoPiGo 3” instead of “Grove Pi” Worked, kinda wonky until the next boot.

Ultimately the solution was to remove the Vellman display board that plugs into the first 26 pins of the GPIO. He thinks he’s a GoPiGo again, but he’s still very, very sick. Ultimately I’m going to have to re-flash R4R Buster and copy all my work back over. (I should really put it up on GitHub as soon as I find a dev environment that isn’t a clunky beast.)

So, @cleoqc, here’s my question:
What is it that distinguishes the GoPiGo from the Grove Pi? What would have to happen for Charlie to become so thoroughly befuddled that it basically whacked the entire installation of R4R?

Obviously the takeaway here is the old joke about the guy who went to his doctor and said:
“Doctor, it hurts when I do that.”
“Well then, don’t do that!”

I’m assuming that the Vellman screen is I2C and uses one the addresses that GrovePi uses
You could disable the automated robot detection, it should take care of the split personality your robot experienced.

How is that done? What I2C address(es) does the Grove Pi use?

Even after removing the Vellman board, Charlie’s install was so messed up, half the functionality doesn’t work anymore. Guess that was not a wise move. At least I can re-flash the SD card and I’m back in business!

I don’t have a Raspbian for Robots next to me at the moment. I’ll see if I can find it in the code repo.

It’s possible your card is messed up. It would be easier to start from a fresh one. That’s the cool part about GoPiGo, you can’t really mess it up to the point that it stops working forever.

Then run the above lines before adding the screen.

That’s the cool part about GoPiGo, you can’t really mess it up to the point that it stops working forever.

Truer words were never spoken! The only fussy part is if you have work stored on the card. I’m going to have to copy it off before I flash it again. And then re-configure it. And then change the name. And then. . . .

On Raspbian for Robots, you have an SD card copier available to you to keep a backup.
I suggest you start using it

On Raspbian for Robots, you have an SD card copier available to you to keep a backup.
I suggest you start using it

And where might that be hidden? I’d love to make backups!

Do I have to pull the card to do it, or does it back up the card in place?

You could disable the automated robot detection

I can do this, but once that’s done, do I have to do something to make sure it comes up as a GoPiGo? Or, will it just use the “Detected Robot” file as is? (i.e. Let the rebuilt instance of R4R run normally once and let it autodetect, then disable autodetect?)

As long as you don’t swap the card for another robot, the detection will stay in place.

I’m going to make sure everything ELSE is working before I plug the screen in again. . . .

And I am tempted to make an image backup of my SD card too!

The wxPython module is required to run this program
cyclicalobsessive March 3, 2020, 8:11pm #12

image backup of my SD card

While it is certainly possible to make a copy of the SD card by removing it from Charlie, and make a binary image, since the mere act of extracting (and reinserting) the SD card requires more dexterity than I can often muster, I use rpi-clone and a USB SD card adapter on Carl:

Cloned partitions are mounted on /mnt/clone for inspection or customizing.

all of rpi-clone is wrapped into a nice user interface called SD Card copier. 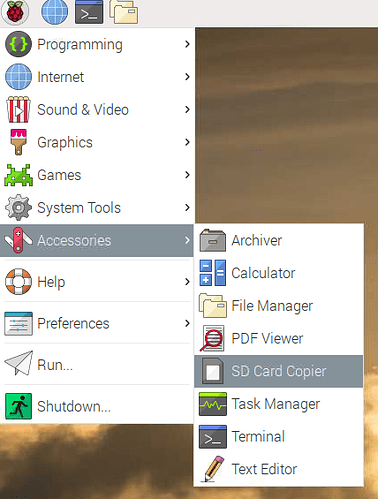 all of rpi-clone is wrapped into a nice user interface called SD Card copier.

Exactly the point of it. It does require a second card, the only drawback.

Exactly the point of it. It does require a second card, the only drawback.

Acronis True Image claims to be able to perform “hot” backups too.

I’ve just never been able to get my arms, (or my sense of trust), around the idea of a “hot” backup on a running file-system, with files open, and things potentially being modified, and. . . .

Of course, those years of WinDoze experience haven’t made me overly confident about much of anything - Windows 10 still cannot find my Mint 19.3 installation on the same physical hard-drive!

Mint, on the other hand, has no difficulties finding - and booting! - my Windows 10 partition.

I guess I’ll have to (grinning wildly) condescend to allow LINUX to be my Windows boot manager!

Regarding the “backup files” from the Dexter desktop and the SD copier utilities, how big should the flash-drive / backup SD card be?

Did you try this?

Greetings! Here’s an idea I had that I thought I’d share. Issue: MicroSD cards are tiny, and they are easy to loose. MicroSD cards are tiny. They can be difficult to remove from tight spaces without dragon-claw fingernails, tweezers, or small pliers which can damage the card. Once written, there is no way to know what’s on them by simple visual inspection. Having run into all three of these problems - loosing them, damaging them and accidentally overwriting something important - I needed t…

Did you try this?

Yes, I use 2 inch long segment of 12mm label maker tape folded in half making a 1" pull tab.

BUT, It still takes a prayer, a dance, and a miracle to get it back in.

I have tested my monthly clone backup twice - everything seemed in order, but I didn’t run a MD5 sum or such.

the SD card copier will indeed let you backup the inserted SD card that’s up and running. it works. it’s linux

yes, you do need a second SD card to back up to.