Raspbian for Robots VS Cinch VS Jessie VS DexterOS

I have a GoPiGo2 which I’m trying to use. Unfortunaely the software installation instructions have me going in circles and I’m thorougly confused. What image is to be used with a GoPiGo2?

The instruction page lists and links to all three ISOs, so i’m not sure what to use. The materials seem to refer changingly to Raspbian for Robots VS Cinch VS Jessie VS DexterOS.

Help would be much appreciated!

I would have you take a look at the following post - this will explain all the differences between Raspbian For Robots and DexterOS, which are our 2 main products.

[SOLVED] Raspberry Pi asks for password only for DexterOs; does not accept "raspberry"

Hi @terryandunha, DexterOS is a different product compared to Raspbian For Robots. The first time you had created a “DexterOS” image wasn’t actually a DexterOS image, but a Raspbian For Robots image. With Raspbian For Robots you: Have a flavored Jessie OS that’s intended for our products. Have full access over your Raspberry Pi. Have your own scripts that do whatever you want. Have the exact same experience as with a Linux OS. With DexterOS you: Have our proprietary OS for…

Apart from these 2, there is also Cinch, which is just a tailored Raspbian For Robots which transforms your robot into a moving access point to which you can connect with a laptop. The disadvantage of Cinch is that you don’t have access to the internet because of the obvious reasons.
Through a simple command, Cinch can be turned to a regular Raspbian For Robots and vice-versa.

Last but not least, Jessie is the Linux distro on which all these 3 products (Raspbian For Robots, DexterOS, Cinch) are built upon.

Hope this makes sense to you.
If there’s something still unclear, please tell us.

I have the same exact question and I don’t believe that post helped that much.
I think a table needs to be made.
ROWS would contain Raspbian for Robots, DexterOS, Cinch, etc, etc
COLUMSN would contain features, options. Bloxter, OpenCV, gstream, sudo options, ssh abilities, etc, etc.

I am still unclear and will continue googling.

I have such a table already made. Let me see if I can find it

Here is a summary in table format of the major differences between the operating systems that our robots support.
Hope it helps.
This chart is valid for dexterOs 2.0 and up. (table slightly updated on March 18, 2019) 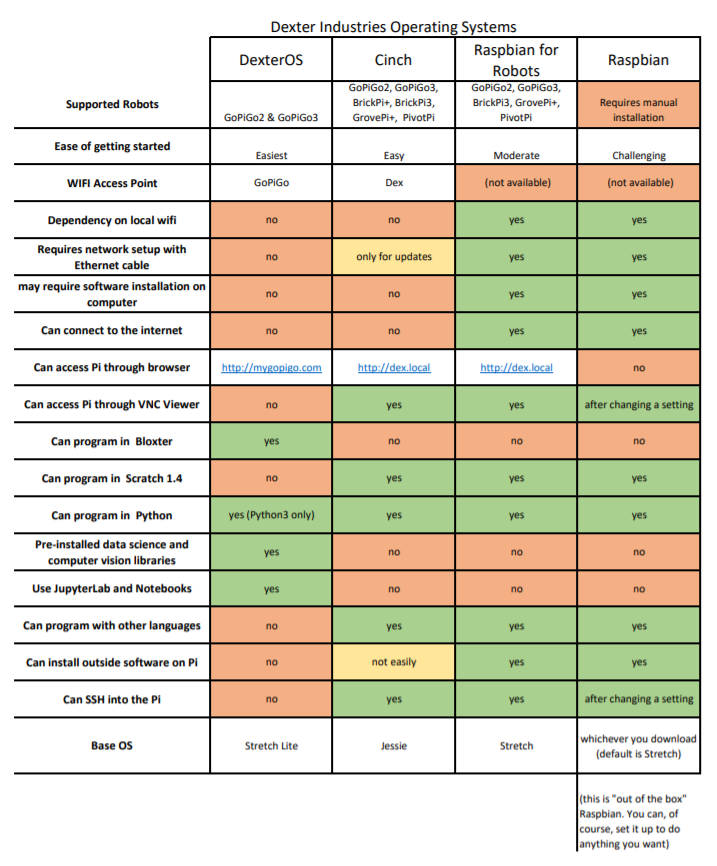 I love it. Thanks a ton!

Gives a good idea of the capabilities of the OS(s) that are available to us.

Does anyone know the latest Dexter OS or Raspbian images that can be used with the Brickpi+ (not Brickpi3)? I have an older model we’re trying to mess with. We could never get the lego motors to work with it so I want to try upgrading again and see if it makes a difference.

There is no DexterOS for the BrickPi, it’s strictly for the GoPiGo3 (hmm, something I can add to the OS table)

We’ve removed BrickPi+ from Raspbian for Robots, so your only option is to start from Raspbian and run the installer
sudo curl -kL dexterindustries.com/update_brickpi_plus | bash

Perhaps the entries under R4R and Raspian for:

(I brought up my GoPiGo3 headless and wireless from first boot, but I had prior RaspberryPi / Raspbian experience. I don’t recall what DI documentation instructed. )

Indeed it is now possible to side load your wifi info before the first boot, thus bypassing the ethernet cable. However, it’s been our experience that few people know how to edit a text file outside of Microsoft Word. We seem to be a rare breed.

Of course GoPiGo users are awesome but many are pure beginners.

Notepad++ is an awesome open source/FOSS editor for Windoze. You can edit files with Unix-style line endings and if originally written for Windows, it can convert to Unix line endings.

Perhaps the entries under R4R and Raspian for:

(I brought up my GoPiGo3 headless and wireless from first boot, but I had prior RaspberryPi / Raspbian experience. I don’t recall what DI documentation instructed